On this last week of summer (at least that’s what the calendar says!) we have another very special display for you. Our new artist for September brings us a whole gallery’s worth of original, exclusive photos part of a concept exhibition. Come to Gemini tonight September 19th at 8 PM SLT and witness the light and the darkness in Carter Holloway‘s art! 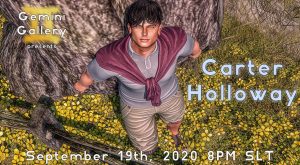 Ever since his debut in the world of pornography, involving mostly ovine co-stars, Carter has built a reputation based on the complete lack of morals, an ego inversely proportional to his penis size (the camera adds about 10 pounds and 6 inches) and most notably his questionable personal hygiene, something that might explain ( but not justify) the fact that most people appearing in his pictures have to undergo deep sedation during the procedure . We could go on for hours narrating stories about Carter, especially those already featured on Dateline, but we’d rather  keep going at it during the party later tonight, so you really don’t wanna miss this one!

Okay, in all  seriousness: Carter is one of the funniest people you can have the pleasure to work with, with his constant taste for banter and unique brand of self-deprecating humor that just begs to be fed, knowing fully well that since his positive qualities are so many, it’s less boring to make up some rather silly bad ones. We are truly honored that he chose to bring his work to the gallery committing to a full display of originals, which he started creating based on the concept of duality: about half of the artwork he created shows his good, ‘light’ side – as good as this naughty boy can be at least! – while in the other half he gets to show an edge in several unique ways, through some rather dark imagery.

Join us tonight at 8 PM SLT: meeting artists at these opening is always fun, but I suspect this is gonna be quite a ball. The roast, I mean, the exhibition will be dj’d by our lovely Zuby Gloom™. Don’t miss out!